The Bird Who Doesn’t Fly. 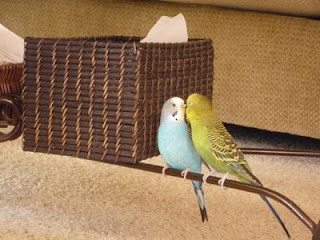 If you’ve ever read my bio, you’ve probably seen my crazy parakeets mentioned someplace. Believe it or not, birds have neuroses just like humans. Ours are no exception. Each bird hubby and I have ever had came with its own personality, quirks and prejudices. We currently have two budgies who are mates. The female used to fly all over the place, landing on things she wasn’t supposed to be on. We called her a "naughty birdie" and laughed at her escapades. Once our other birds passed away, she and her mate were left alone. Birds can go into depression when they lose a friend but these two seemed content to be together. Their grieving didn’t take more than a few days and then they were fine, eating their veggies and fruits and playing with their toys again.

After a while, the female began to fly less and less. She seemed content to sit in the cage and have her mate feed and preen her, which is how male budgies get their groove on, if you know what I mean. The vet checked her out and couldn’t find anything wrong with her. We even learned that some birds are content to stay in their cages and refuse to come out. But she’s a bird and birds are supposed to fly, right? That’s what we think, too. But after coaxing without success, we left her alone, figuring she would come out on her own eventually. Everyone once in a while, she would sit in the doorway and get startled by her mate and come out. But she hadn’t flown in so long that she had no strength in her wings and went straight to the floor. Instead of flying back, she would just waddle around – she’d put on a little weight – and sit under the coffee table. Her mate would join her on the floor and they would sit and preen. When she wanted to go back into her cage, she couldn’t get enough height, so she would waddle to me and wait for me to offer my finger as a perch. I would hold her up a few feet from the cage and, when she felt like it, she would fly back.

This was the only exercise our girl was getting. She had turned into a full-on couch potato, complete with waddle weight, and we decided to do an intervention. I began to take her out of the cage, whether she wanted to come out or not, two to three times a day and hold her on my finger until she flew back on her own. Hubby’s afraid he’ll squeeze them too hard, so I do birdie meds and anything else that involves holding them against their will. I don’t mind at all. I got nipped at the first week or so because she didn’t like me taking her out. Yes, it hurt, but after having animals my whole life, I’m used to it. Besides, how would you like a humongous hand reaching in through your front door and grabbing you? I know I would put up a fight, so I certainly can’t blame her for that. Her nips were a warning, not an attack, and she never drew blood.

After the first week, she stopped nipping at me and allowed me to hold her, knowing I wouldn’t keep her in my hands for long. Birds don’t like their wings held, even if they refuse to fly with them. Our little birdie even began to lose a bit of her waddle weight. I found this encouraging and would take her farther and farther from her cage every three days or so, until she grew more confident and got excited about these short flights. Her mate seemed to enjoy having her out again, so we put their birdie play yard up. This is a wooden platform with ladders, ropes and other toys. We placed the play yard in its previous spot, about ten feet from their cage at a higher elevation. They loved to play on it in the past but hadn’t since our girl decided not to fly any longer. This time when I took her out, I put her on it. She flew back to the cage with no problem at all and even sang a jaunty tune afterwards. Hubby and I did a little happy dance.

Then, yesterday, our girl came out on her own for the first time in months, flew to the play yard and back to the cage. It was just like old times. We did soft cheers of encouragement, and her mate sang his little heart out. After that, she did a half lap around the family room. We will continue to encourage her to fly and cheer her on when she does. She’s no longer “the bird who doesn’t fly”.