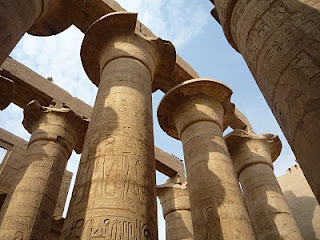 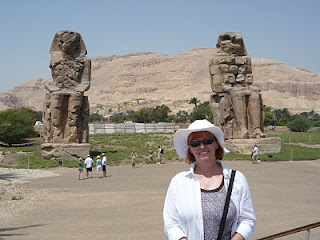 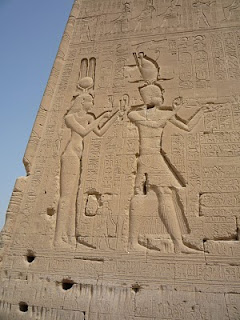 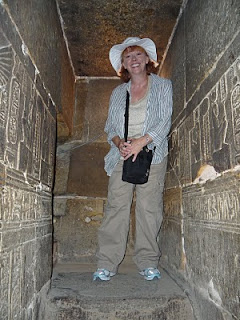 Here is the original post from my old myspace blog about my recent Egypt trip. You may have read these blogs but I'm moving the most recent ones here. I've added photos.

Hubby and I just got back from Egypt, a trip we’d been planning for some time and a place both of us had wanted to visit since childhood. But who hasn’t, right? The first thing we noticed in Cairo is the traffic. Lanes are optional, horns mandatory, and accidents minimal to non-existent. We were as likely to see an 18 wheeler as a donkey on the various roads, which consisted of everything from smooth concrete to potholes and speed bumps. While riding with our driver, Mohamed, who enjoyed joking around, I tried my best to decipher the horn signals.

1. One tap, mainly used for pedestrians – I’m coming, get out of the way.
2. Two taps – look out other cars, buses, donkeys, trucks – I’m coming through.
3. One long blast – hey, buster, look out, you’re drifting into my area.
4. A series of toots – howdy, everyone, how’s it going

After the entertaining ride from the airport to hotel, we were greeted with a nice view of the Nile River from our balcony. Surreal to think we were finally in Egypt, where ancient Pharaohs had once ruled this land. The next morning we drove to Giza to visit to the pyramids and sphinx. Not only is it humbling to stand in the shadows of these massive structures from a 5000 years ago civilization, squatting, hunching and just plain crawling into the hot tombs, is a feat in itself, and one I wouldn’t have missed. Cameras aren’t allowed in the tombs but we got plenty of pics from the outside.

The Egyptian people are friendly and love to chat and after crawling out of one of the ancient pyramid tombs, hubby and I were laughing about something. Don’t remember what. Maybe we were just punchy from the heat. But a man stepped to us and said to my husband, “You have good wife. She worth a million camels.” Now, I wasn’t sure whether to be flattered or insulted, so I chose flattered and laughed all the harder. The man grinned and repeated his statement, patting me on the shoulder.

So, not only did I have an awesome time in Giza, but I’m also worth a million camels. Go figure.

We took a day trip to Dendara (Dendera), which is just full of history from ancient Egypt to the ancient Romans and Greeks to Ptolemy, who are said to have made alterations to the temple and even built structures here. We arrived before any tour buses and got a chance to walk around this area while it was quiet. This made the site all the more special for us, especially when gazing up at columns and walls filled with ancient hieroglyphics. You can see some of the original paint color here, too. We even had a chance to walk into some of the underground tunnels. Ancient Egyptians decorated everything with hieroglyphics, one reason I love them so much.

While seeing the great pyramids in Egypt was a dream come true for hubby and me and one we’d both been dreaming about since we were kids, I have to admit, the Valley of the Kings in Luxor may have been even better. Various tombs are in this area. Two of the most famous being that of King Tut and Ramses II. The colors in some of the tombs are so well-preserved, you’d think they were painted recently, but some are over 3000 years old. Three-thousand! While that’s a blip in geological time, it’s huge for us mere humans.

And a topper to this marvelous cake is King Tut’s mummy. Yep, his actual mummy is in his tomb. We stood right next to it. The sarcophagus is amazing, but to be right there with the king himself in his own burial chamber, well it’s extremely surreal. While photos are allowed driving up to the Valley of the Kings entrance, cameras are no longer allowed inside. So, I've borrowed some photos from friends who were there a few years ago to share with you, along with the ones I took.
Posted by Dana's Blah Blah Blog at 4:21 PM