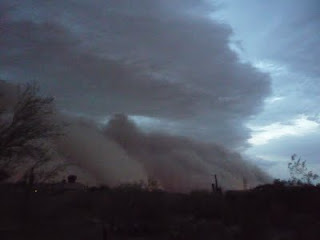 The monsoon got a late start here in the desert but we certainly haven't been disappointed this year. One of our recent dust storms made news all over the country. I managed to snag a photo from our backyard just before it struck. We had relatives sent us texts and emails, worried we'd been buried alive or blown away by it.

No need to panic. While driving in a dust storm is dangerous and one should get off any road as quickly as possible, they don't usually do too much damage other than get dirt on everything. If it's outdoors, it will get covered in a layer of dirt. And don't even get me started on the pool. It's never fun cleaning filters after a dust storm. We were lucky we had both cars in the garage when this big one hit us. Two more rolled into the Valley of the Sun a few days apart but they missed our house, luckily.

Yesterday, we hit around 112 degrees with no rain in the forecast for days. Then evening came and a few clouds covered the sky here and there. The radar showed rain! It wasn't anywhere near us, so after dinner, hubby and I decided to take a swim. Our usual evening workout during the sweltering summer months. Well, I got in one lap when a bolt of lightning charged through the sky above us. I swam as fast as I could for the steps and we climbed out of the pool. Hubby was laughing at me as we went inside the house, but I have no desire to become a fried human.

Several minutes later, the thunder started. Quiet at first. The sky began to put on quite a lightning show and we checked the radar again. A big cell was moving in from the west. Not long after that, a huge boom of thunder rattled the air and the rain came down. Sometimes the temperature will drop into the 70s or low 80s during a monsoon and we can open doors and windows, but no such luck last night. Yes, our 112 degrees we had during the day was gone, but we didn't get below 90 during the monsoon. Nevertheless, we enjoyed seeing the wet stuff.

The rest of the week and this weekend we're in for more scorching temps. Again, there's no rain in the forecast. Yeah, I've heard that before.
Posted by Dana's Blah Blah Blog at 3:48 PM

Dana, I cannot imagine weather like this. That photo is amazing! We've had a hot summer, but nothing near 112 degrees! And, I've never seen a dust storm!! Looks scary :)

Thanks, Marci! It can get crazy here sometimes. Funny but the dust storms are pretty tame compared to the monsoons, unless you get caught on the freeway when one rolls through. We actually hit 118 this last summer. Bleh. I really miss the CA beach life when every day is about 70 degrees. =)