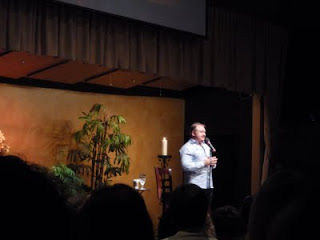 When you get up each morning between 5:30 and 6:00, it’s difficult to stay awake much past 10 p.m. but hubby and I did just that last night when we went to see famous medium James Van Praagh. The place was sold out. And I mean every single one of the eight-hundred-fifty or so seats was taken. Mr. Van Praagh mentioned that if we thought there were a lot of people in the audience, we should see how many were with him on stage.

He is a very entertaining person who seems to enjoy humor, and that came through in his appearance last night. The audience seemed very enthusiastic and most hung on his every word. Though there were a couple of men who seemed to be there only because their wives had threatened them with something, or perhaps a lack of something, if they didn’t come along. Of course, my hubby came because he loves to go and see mediums. No really. I’m serious. Fine, don’t believe me.

The first thing Mr. Van Praagh did after his introduction was to ask for general questions from the audience. He specified that at this point in the evening, he didn’t want any personal questions about loved ones, just general ones about his profession to get the audience in the right state of mind. The first woman who stood up was handed a microphone and started asking about her dead loved-one. Mr. Van Praagh reiterated that he was only taking general questions and regrettably moved on to the next person.

A couple of times during the evening he had to remind audience members to “listen to my words”, because no sooner would he ask for people to refrain from a certain question than someone would ask just that. He did this with humor, of course, but I couldn’t help wondering whether he got frustrated by people not listening to his repeated instructions. I know I would. Which is probably why I didn’t choose a life as a therapist. Saying, “Well, don’t do that anymore,” or “Just quit it,” probably wouldn’t win me a lot of patients.

The next thing on the schedule was a meditation for the audience, to clear out expectations and prepare for any spirits that were eager to make contact with those of us who had paid our hard-earned money to be there. But really, his sessions are very reasonably priced, and he even mentioned that he doesn’t like it when those claiming to be mediums charge outrageous sums for their work. He told us to be wary of high-priced mediums and psychics. I’m no stranger to meditation so this part of the evening was very easy for me. In fact, it was quite relaxing after a long work day. So much so, that hubby almost fell asleep. He loves mediums. Really.

Next, we got to the part everyone was actually there for – the readings. Since I went for book research, I wasn’t expecting Mr. Van Praagh to call on me. And he didn’t. Almost had you, didn’t I? With no expectations, this gave me the chance to observe others as messages were given to them. There seemed to be quite a number of desperate people wanting loved-ones to come to them. In fact, more than a few times, people would stand after Mr. Van Praagh mentioned the first couple of details, like a name, place, date or reason the person died. Then we would find out that those people standing didn’t have any deceased loved-ones that matched his details about the spirit who had come to him. I felt for them, but when you have about 850 people present and only an hour or two for readings, a lot will be left out.

The majority of the readings were fairly detailed, with Mr. Van Praagh asking for yes or no answers from the subject. He said that he just wanted them to verify what he was saying. When they couldn’t, he asked them to check with other family members. There were a couple of spirits who had died late in life, three suicide victims who had come together as a spiritual “support group” – Mr. Van Praagh’s words – and even a murder victim. Of course, the murder victim, sad though it was, interested the writer in me the most, so I was happy when he had a lot of details for the family about the unsolved murder. I hope what he told them can help the police in their search. But no matter who came through, he told us that they were all okay now.

Last night gave me more insight into how a medium works, which I will use in my paranormal books. Of course, I’ll Hollywood them up, as usual. After all, I write fantasy, and if I stuck to exactly how mediums claim things work for them, the books wouldn’t be as exciting for me or my readers.

From what I’ve read, this is also what happened with the TV show The Ghost Whisperer, which Mr. Van Praagh co-produced and advised. He didn’t talk about the show during last night’s appearance but I had read an interview with him about it. He would argue with the writers that ghosts didn’t do this or that, and they would counter with something to the effect that “this is Hollywood and we need more excitement in the show”. They would lose viewers if they didn’t create conflict and drama. This is true with just about any media. Humans sometimes hate to admit it, but news that nothing particularly interesting happened and everyone is happy or content doesn’t keep audiences entertained for long, if at all.

We were allowed to take photos during the session so I took a few. Of course, the paranormal investigator in me was hoping to capture some evidence. Like spirits hovering around Mr. Van Praagh. But other than a couple of blurred photos when the lights were low, I got nothing out of the ordinary. Though it would have been really cool if I had captured something. There was a book signing afterwards but hubby and I were tired and came straight home.

One medium down, several more to go. I like to get varied opinions about how mediums work. It also gives me some insight into the life of my great-great-aunt who worked as a medium in the early 1900s. Of course, it would have been awesome if she had come through to answer some of my questions in person—er, well, in spirit. I’ve got a few genealogy questions for other dead ancestors, as well. Hmm, maybe I need to set up a private session sometime.

How fun; wish I could have been there too; he sounds like a neat guy! Thanks for your blog!

Yes, it was an interesting evening. Thanks for stopping by. =)