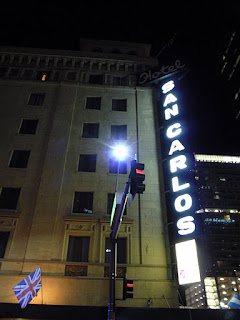 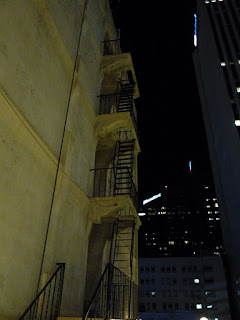 Front of the hotel on left.

Fire escape on right that once led to the roof. 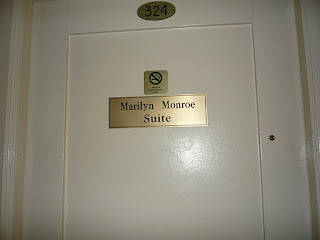 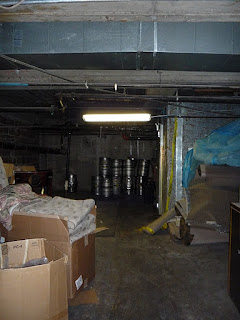 The evil beer spirits in the basement.

First of all, let me stress that I was investigating on my own this time and not with my paranormal team. We do that sometimes, attend other tours and investigations in hopes of finding something. A friend met me at the Hotel San Carlos for one of their famous ghost tours on Halloween weekend one month ago. While this wasn’t a traditional investigation and we had a lot of contamination from other guests, we had a entertaining time and I learned some history I hadn’t known about.

The land where the sits has quite a past. About 400 years ago, Hohokam Indians lived on the land and used the underground spring that still exists today, so you can imagine there might have been burials from that time period. In 1874, ’s first schoolhouse was built on the property and later expanded. Children’s deaths are associated with that schoolhouse, which is no longer there. Finally, in 1928, the San Carlos Hotel opened on the grounds. The owners tapped into the ancient spring, which still supplies water to the hotel today. While the tragic deaths at make for interesting ghost stories and highlight the ghost tours, the hotel is well-known for its ties. Stars such as Mae West, Clark Gable, and Marilyn Monroe stayed at the during ’s heyday.

I’ll be mixing in some of the history, along with my experiences during the ghost tour. After our guide gave us the history of Leone, the woman you’ll read about next, I got what I believe is an EVP (electronic voice phenomena) but I’m having other ears take a listen. As soon as I get anything verified, I’ll post clips on my website and let my blog readers know when they’re up.

In May of 1928, a brokenhearted woman named Leone Jensen snuck through the penthouse and jumped to her death from the roof – 8 stories up – and died. Others say her cheating boyfriend may have pushed her. Authorities originally thought she was only 22 years old when she died, but recent research puts her at 32 years of age. Our guide told us that psychics have revealed Leone was pregnant at the time of her death. Her body was shipped back to LA for burial, so unless she’s ever exhumed, we’ll never know if the pregnancy is true or not. Leone was wearing a white dress when she died and supposedly haunts the halls of the in the form of cold air, a white mist, or ribbon of light. I would have loved to see her, but I had no encounters with mist or light ribbons that night. And the only cold air I felt was when we were outside.

On , exactly 77 years ago to the day that we were on our tour, a man with financial problems committed suicide by turning his hotel bathroom into a gas chamber. He died from carbon monoxide poisoning. Another December – unfortunately I didn’t catch the year and the audio has too much ambient noise for me to make it out but it sounds like 1933 – a 41 year old single woman hit on hard times and killed herself by taking cyanide capsules.

The most recent death happened in December 2004 when a man named Bruce climbed the fire escape from the pool area up to the roof and jumped to his death onto . This man had hit hard times, like others before him, was going through a divorce, and had lost his job. After that, the hotel hack-sawed the roof access from the pool area. The pool area was very noisy with traffic, bar patrons from next door, and hotel guests, so if I caught any EVPs here, I’ll never know it. After this man’s death, prankster things began happening in the manager’s apartment, joining what our guest said is also a dark entity in that area. The investigator in me was thrilled that we were headed to the manager’s apartment next.

The manager’s apartment was originally used as servants’ quarters and now houses workout equipment. Unfortunately for those of us with cameras, there are also several mirrors on the walls, which play havoc when trying to capture anything paranormal. I hung back, staying near the far wall and as distant from the other guests as I could get. I caught a whisper and what sounds like a breath on my audio recorder, but I’m having those verified by others to make sure they’re actual EVPs before I post them. Someone mentioned that a lot of people were getting touched in the closet area, but I didn’t experience anything physical at all, and I even asked for something. I thought about staying behind after the others left

Our guide warned us of the evil spirits in the basement. Evil beer spirits, that is, in the form of kegs. I watched the faces of the other guests and some seemed worried at her first statement, then relieved when she mentioned beer. Novices. I, on the other hand, was disappointed to hear the evil basement spirits came in a keg. On the way down, I noticed the floors were uneven in several areas, typical for a building this old, but that can also make people feel dizzy or off balance, normal sensations that can be mistaken for paranormal. The tight stairwell had high EMFs (electromagnetic fields) too, which is said to affect those sensitive to magnetic fields. It’s called a Fear Cage for that very reason. Some also believe EMFs attract entities because ghosts feed on the energy in order to manifest.

Finally, we made it into the basement, which put out high EMFs like crazy. This didn’t surprise me, given the amount of pipes and hanging wires above my head. My EMF detector went off so consistently down here that I turned off the sound. On my audio, I can even hear the buzzing of electricity sometimes, it’s that strong. Again, I hung back from the crowd. Unfortunately, people were so excited they kept talking, laughing, and making all sorts of shuffling noises, while the guide was talking, which seemed to echo around the basement. We also could hear chairs scraping on the floor from the bar and pipe noises and clangs. This was a ghost tour, not an official investigation, and most people were here for some spooky Halloween fun, so I just had to go with the flow.

Later, when I listened to the audio, I was right about there being too much noise and talking in this area to discern anything paranormal. I would love to go down there with one or two of my team members late at night when the bars are closed and see if we could get anything. I’ll have to look into that and see if it’s possible to get a team in there for a private investigation. Wouldn’t that be fun?

Thanks for popping by. I’ll get any EVPs posted once I get them verified.