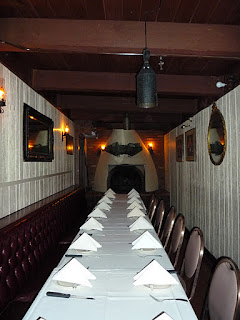 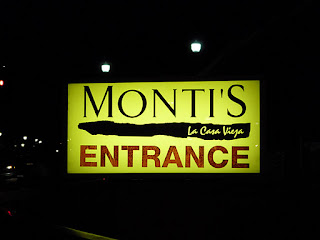 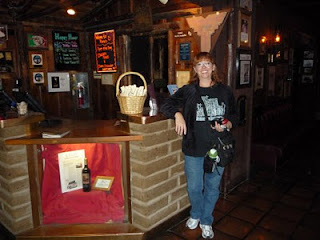 As promised, a peek into my latest investigation. This time I went to Monti’s Restaurant in Tempe, AZ, one of the oldest establishments in the city, and a purportedly haunted establishment. This was separate from my private investigative team and not in any way affiliated with them. We had some famous guests with us, including Heathyr Hoffman from Ghost Hunters Academy and one of the original Amityville house residents. It was quite a night.

First off, the hosts told a little about themselves and their experiences in the get-acquainted hour, while the restaurant staff was clearing out customers and cleaning up. We were going to have the place to ourselves, at night, in the dark. I couldn’t wait. I brought handheld gear with me because I knew we would be moving around a lot. I had my digital camera, my digital recorder, a flashlight, an EMF (electromagnetic field) detector, a grid light, and the most important tool of all, myself.

There was one table with a small group of people who’d been drinking heavily before we ever got started. I didn’t want to be anywhere near them because I just knew they would be trouble. Or at the very least, loud and obnoxious, which is not conducive when investigating. That behavior would never be tolerated in my private investigative team but since I wasn’t with them tonight, I had no say in the matter. All I could do was stay far away from the drunks. They were loud so it was easy to avoid them.

After the introductions, I walked around the restaurant, getting to know the place a bit, and did a sweep. This means I used my EMF detector to see where the electric spikes were located. There were a couple of huge spikes in two areas of the restaurant, the hallway and the enclosed banquet room. Nothing paranormal. Just a lot of old wiring and pipes, but the amount of EMFs in those areas were enough to create a fear cage. People sensitive to electromagnetic fields can experience hallucinations, feelings of paranoia, nausea and lightheadedness, which can be mistaken for paranormal stuff. This is referred to as a fear cage. Lucky for me, I’m not very sensitive to it. Another theory is that spirits use electrical energy to manifest so sometimes ghosts will be attracted to those areas. I was open to experiences and at the same time skeptical that anything paranormal would actually happen. I’ve heard from other investigators that this is a healthy attitude to take.

As I was doing my sweep, I also took photos. The original part of the restaurant has uneven floors, another thing that can contribute to a feeling of paranormal activity, as well as a lot of mirrors. Reflections bounced around everywhere. I had to keep this in mind when looking at the photos later because mirrors can toss all kinds of light and shadows around and look like ghosts. A neat thing about the place were the original doorways that date back to the 1800s. They’re short. Even I can touch the tops of them. Creating short doors was a trick of the old western movies to make actors look bigger and I got a kick out of feeling tall. Of course, these doors weren’t created for a movie set. They were the real deal. The tin ceiling is beautiful, too, but yet another reflective surface I would need to keep in mind.

Once I finished my sweep, the real fun began. I joined Heathyr Hoffman’s group and she led us into a room with a beehive fireplace, where we sat down at a long table and set up our equipment. Two others had flashlights that twist on and off, so they set them up and we began to ask questions, hoping to get responses with the flashlights. Twist on for yes and off for no. Simple, right? I didn’t think anything would happen but we began to get responses almost right away. This excited our group and we became quite animated in-between our questions. Heathyr, who is also a sensitive, said she felt a presence in the room with us, which added to the excitement. We continued this until the activity waned.

After a while, we moved into the banquet room and started a session with those in the other groups. Again, we got responses with flashlights. Everyone seemed on their best behavior and the room was very quiet for such a large group. I don’t remember seeing the drunken people there so maybe that was the reason.
Posted by Dana's Blah Blah Blog at 5:03 PM