Vikings and Tulips and Ancestors, Oh My! 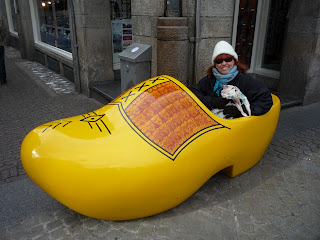 Once every year or two hubby and I take a vacation out of the country. In 2010 we chose as a celebration of our 20 years of marriage and a place we had both longed to see since childhood. This year, we decided to go to and . Why? Because we hadn’t been there. And because we both have ancestors from those areas.

Being west coasters, hubby and I don’t have a lot of cold tolerance, so we bundled up in three layers of clothing to brave the 30-50 degree temperatures and off we went. is a proud, green city with an efficient public transportation system, electric cars, renewable power, and lots and lots of bicycles. The city is planning to be carbon-neutral by 2025 and is well on the way to meeting that goal. I love that about the Danish people. 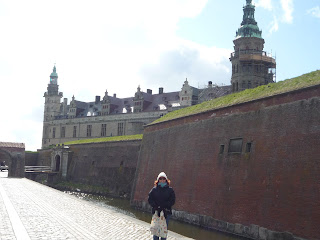 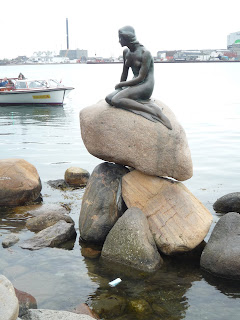 We visited Hamlet’s castle, the location Shakespeare chose for the setting of his famous play, complete with a moat and temperamental swans. The Danish have a saying that goes something like, “The castle made Shakespeare famous in his day and today Shakespeare keeps the castle famous.” We also stopped at Rembrandt’s house to see where the famous painter once lived and worked. We walked around the city, enjoying the old buildings and green areas, and even found ourselves at the water’s edge where The Little Mermaid statue rests. There weren’t a lot of tourists here so we got to experience daily Danish life without having to press through crowds of people. 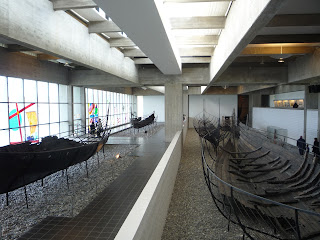 As someone with Scandinavian ancestors and a high probability of Viking roots, I had to visit the in . Fifty years ago, archaeologists recovered five Skuldulev boats that were deliberately sunk with stones to create a border that kept enemy ships out of the harbor. The preserved remains of these ships are on display in the museum, and it’s amazing to see the expertise it took to build such ships long before the modern age. This July, the recreated Sea Stallion ship, will sail from to in commemoration of Vikings who sailed that route so long ago.

Next, we flew to , . This place is special because hubby and I both have ancestors from this great city. No trip to would be complete without a visit to VanGogh’s museum, which just happened to be a short walk from our hotel, thanks to hubby’s great travel-planning skills. The painting of Van Gogh’s bedroom and his famous self-portrait is here, but they didn’t have Sunflowers or Starry Night, my favorites, so I was a bit disappointed.

We ventured into , where one of my prominent ancestors once lived but had no luck finding records here. And you can forget finding your ancestors in the cemeteries if they died more than 50 years ago. The Dutch rent out graves for a period of several years then the bodies are dug up and cremated, making room for another family to bury their loved ones in the same spaces. Land is scarce here, so this makes sense, but it can make genealogy cemetery research a headache sometimes. Still, it was a treat to see the city where my ancestors lived and worked nearly four centuries ago. 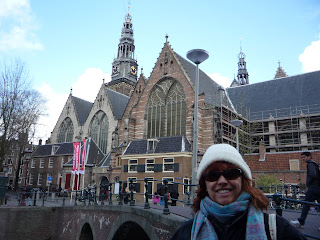 Back in , we had better luck, at least on my side of the family tree. I got a printout of a marriage record, thanks to the wonderful people at the archives. They even took the time to translate the Old Dutch language for me. Afterward, we got to visit the Oude Kerk () where my ancestors listed on that printout married back in 1638, just before they left for () and a better life. Oude Kerk was built in the 14th century so it’s seen a lot of history. When I showed the marriage record to the church personnel, we were escorted into the restricted area where my ancestors signed their marriage announcement, just four years before Rembrandt signed his. I walked and stood exactly where my ancestors and the famous Rembrandt had been 375 years earlier. I can’t tell you how amazing that felt. I was saddened we didn’t locate any of hubby’s ancestors on this trip, but I’ll keep digging in the online records. And who knows, maybe one of the photos we took will connect with his side of the family tree. 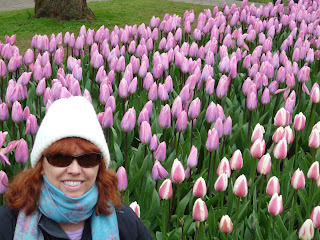 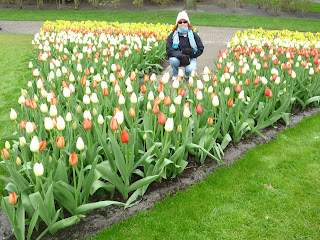 While the excitement of finding ancestors is on the top of our list, tulips come in at a close second. The whole reason we decided to visit in April was so we could go to the Keukenhof. The cold snap didn’t deter the flowers from blooming and we saw thousands of vibrant colors. Needless to say, I went a bit photo crazy here. And we certainly wouldn’t go to without visiting the famous windmills. I think these iconic structures typify as much as wooden shoes and tulips. Seeing them from the inside is a treat, as well. Especially when you realize they run solely on wind power and were built long before electricity was discovered. 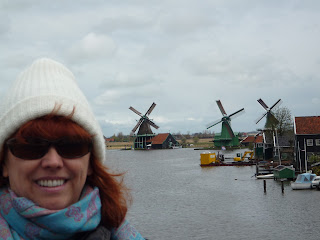 Our vacation to and is just a memory and a giant photo file now, but these countries will always have a special place in my heart because our ancestors once lived and worked there before coming to the . Without them, hubby and I wouldn’t be here now.
Posted by Dana's Blah Blah Blog at 10:38 AM