A recent online post reminded me of an audition fiasco I had back in the 1980s, with Lynn Dally and the Jazz Tap Ensemble, a prestigious LA dance company. My tap instructor, Louis DaPron, who was already in his 70s by then, set up a private audition for me. I was so excited. All I had to do was show up at the Debbie Reynolds Studio in North Hollywood at the appointed day and time. Having begun performing as a child, I was a veteran when it came to auditions, but this was different. This was a man who had taught Donald O'Conner, Judy Garland and numerous Hollywood legends, a man who, though he chewed me out just about every class for not picking up the steps fast enough, said I had talent. He believed in me and I wanted to prove I was good enough to make it.

Audition day came and I was more nervous than any other time. During my drive there, I started to feel nauseous. So much, in fact, that I had to pull over on the freeway and puke. Twice! I managed to pull next to a blue call box so it would look like I was going to use the emergency phone LA county provided every mile. This was the 80s and we didn't have cell phones like we do today. Luckily, I had an old paper bag in my car and there wasn't a CHP around to think I had car trouble. That would make me late! You might be saying to yourself that I was just nervous, and that's what I told myself, though I'd never gotten sick for any audition or performance in my entire life. After emptying my stomach the second time, I got back into traffic and kept going.

I pulled into the parking lot with 1/2 hour to spare, tossed the sick bag into a nearby dumpster, and headed inside to freshen up. I checked in and stretched out in the hallway, the whole time feeling more and more exhausted, but at least I wasn't nauseous anymore. I jumped around to try and up my energy level, then put on my best face for the audition. This was my one and only shot at this job and I refused to blow it. Besides, the show must go on - I had learned that as a child - and nothing short of death was going to deter me. I tried to dance like nothing was wrong, but my balance was a bit off and I had trouble with one of the turns. I smiled as I danced, even though all I wanted to do was go home and fall into bed. I felt like crap, but they were seeing another girl after me and I had to nail this.

After what seemed like a week but was only a couple of hours, I finished the audition and thanked Lynn and the choreographer, whose name I don't remember off-hand. I didn't puke again, thankfully. But by the time I got home, I had to crawl in the front door and all the way to my room, where I passed out on the floor. Yes, I was that ill. I don't remember anything until the next day when I woke up to my roommate shaking me. I'm guessing the other girl got the job, because Lynn never called me back. I was heartbroken to have to tell my teacher that I blew this amazing chance. I confided to him that I was very sick that day but he still seemed disappointed in me. He died about a year later and I always felt that I had let him down.

Today, I'm grateful I didn't get that company job. If I had, I might never have worked on the TV show Rags to Riches or at Disneyland and I might not be a writer now. In fact, I might not be married to my fabulous husband today, because I never would've taken that much-needed job at Waldenbooks, where I met him. Do I wonder what my life would've been like had I nailed that audition? Not anymore. It's funny how things that seem to destroy our world when we're young, sometimes feel so different when we get older.

Me with my tap teacher, Louis DaPron, back in the day. I still miss him. 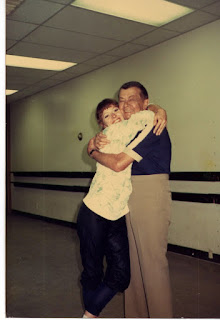